Oil pulling is an ancient practice which has been part of Ayurveda for centuries. It is an important step in Dinacharya and has been gaining popularity in the recent years. Oil pulling is a generic term which consists of two main types according to Ayurveda. They are: Gandoosham and Kabalam. The aspects of each of these is elaborated below. 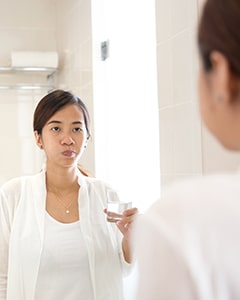 Gandoosham involves the practice of taking a large quantity of oil and allowing it to fill the entire mouth. This is then allowed to stay in the mouth, while being in a seated position for about 3 minutes to start with. With regular practice of Gandoosham, the amount of time the oil is kept in the mouth can be slowly increased. The ideal time is until the mouth starts to secrete or there is emergence of fluid from the eyes or nose. The oil must then be spit out. Never swallow the oil, which will be filled with toxins removed from the mouth. Gandoosham is usually done with sesame oil, which is most preferred for oil pulling in Ayurveda. However, depending on the mixture used for this practice there are two types of Gandoosham: Sneh Gandoosham and Kashaya Gandoosham. Sneh Gandoosham makes use of fats like oils or ghee, while Kashaya Gandoosham is done using herbal concoctions which target specific oral health issues. Gandoosham is trickier than Kabalam, however, it has its own health benefits.

Kabalam is the most common form of oil pulling which has largely been adopted in western countries as well due to the immense health benefits it offers. This practice involves taking a small quantity of oil, preferably sesame oil, and swishing it inside the mouth and gargling it almost to the back of the throat. This can be done for a few minutes in the beginning, and over time can be done for 15-20 minutes for maximum advantage. The oil is then spit out. Kabalam is safe for children above 5 years of age and can be incorporated into daily oral hygiene regimen for best results. It can also be done using coconut oil, since it helps with keeping teeth and gums strong, and leaves a pleasant odor behind. It must be done on an empty stomach, first thing in the morning.

Oil pulling has a ton of benefits and can be done regularly for maintaining good oral hygiene.

We know how amazingly bay leaves will enhance the flavor...

As we all know, the medical term for Pink eye...