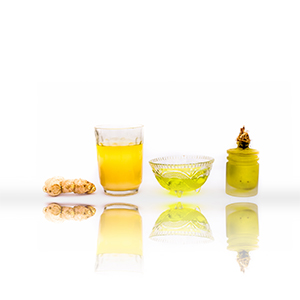 Castor oil is used predominantly in Ayurveda. It’s derived from the castor seed and is known widely for its use as a laxative. However, Ayurveda makes use of castor oil in a number of ways. It is quite fatty and is also known for its moisturizing characteristic. Castor oil is considered to be heating when taken internally and cooling when applied topically. In Ayurveda, it is used both ways depending on the purpose.

Castor oil is used as Virechana or laxative in the ayurvedic therapy of panchakarma. Panchakarma involves detoxing the body and removing all accumulated ama. Castor oil is used before the start of panchakarma or during the course of the therapy. It is part of the purgation phase of the process. It stimulates the organs of elimination including the colon, bladder and the uterus. Castor oil is an extremely potent virechana and in some cases it is mixed with Haritaki for a milder laxative effect.

Castor oil is also known for its ability to help manage arthritis. Ginger tea with a teaspoon of castor oil can be taken every night. This has the effect of lightly heating the body, promoting circulation, and also works as an analgesic, anti-inflammatory with gentle laxative properties. Castor oil is also used for chikitsa which helps soothe arthritis.

Castor oil has extremely thick consistency which makes it great for treating skin disorders such as psoriasis and eczema. It can also be used for extremely dry and cracked skin in any part of the body. It can also benefit hair growth and helps moisturize and heal damaged hair.

Castor oil has antibacterial properties. Ginger and castor oil have been shown to have a great effect at preventing infection.

Castor oil can be used as a pack. It involves using a flannel soaked in oil and covering it with a hot water bottle. This is then placed on the body or affected area for about an hour. This helps break down cysts, fibroids and lipomas. It also stimulates lymphatic circulation, reduces inflammation, and reduces joint pain.

Always consult an ayurvedic doctor before incorporating castor oil into your ayurvedic regimen.

We know how amazingly bay leaves will enhance the flavor...

As we all know, the medical term for Pink eye...