The word guduchi is a sanskrit term which means “that which protects the body from diseases”. This ayurvedic herb is also known as Amrita, or heavenly elixir. Guduchi is believed to have immense power and even kept heavenly beings from aging. The botanical name for this herb is Tinasporacordifolia. It is a creeper which has potent healing properties and can be used in a variety of ways to achieve the required benefits. 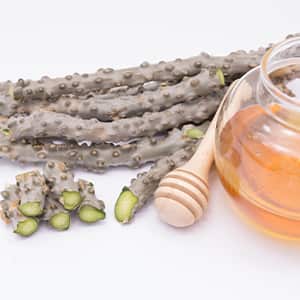 Guduchi is famous for its green, heart-shaped leaves. This creeper plant, when it grows on a neem tree, is believed to acquire the therapeutic properties of Neem as well. Heave, guduchi growing upon neem is widely sought for its medicinal properties. Guduchi itself has detoxifying properties which help the body rid itself of ama or toxins. It also boosts the immune system and is found to have a positive effect in the treatment of colds and flus, arthritis, skin disorders and more.

Guduchihas a light and unctuous taste according to Ayurveda. It is tri-doshicwhich means, it helpspacify all 3 doshas. It has also been found to help kindle digestion, purify blood, and even bind stools better. Guduchi has a heating effect, however this does not aggravate pitta. This herb helps rid the body of ama resulting from undigested food, amavisha which is a blockage of normal paths due to accumulation of ama, and garvisha, which unlike the previous two, is a result of environmental pollution or unhealthy surroundings.

This ayurvedic medicine can be used as required on consultation with an ayurvedic doctor. Depending on your ailments, guduchi can be used to help treat, and better your life in a holistic and natural way.

Joint pain caused due to arthritis, injury, or exertion is...

Monsoon can be extremely daunting due to the cold and...