Historians who discovered ancient scripts found a curative and preventive way of life in the natural system of healing and mechanism called Ayurveda. In existence for more than 5000 years and a body of knowledge passed down from generation to generation, this system of medicine has been making a difference to the way diseases have been understood and treated ever since. Back in Kerala, India eight Vadiya (doctor) families known as the Ashta Vaidyas each owned a branch of this system and medicine. They preached and practised Ayurveda based on the ancient texts. They became legendary for their knowledge and practise. Kerala thus turned into a land to be blessed by this lineage where Ayurveda became an intensive and authentic practice followed even today. Most of the Ayurveda practitioners the world has today have their roots in Kerala or have their gurus in Kerala.

Ayurveda’s most significant achievement is its working methodology which is all about making the body resilient and preventing the contraction of diseases. Kerala ayurvedic therapy is based on rejuvenation therapy where the body is flushed clean of toxins using special herbs that strengthen the immune system immensely and drastically improve the overall condition of the patient. Ayurveda treatment focuses on the root aspect of balancing Vata, Pitta, and Kapha in the human body. Hence, Kerala Ayurvedic therapy is a person-specific and curative therapy prescribed for each person after consultation with learned ayurvedic medical practitioners. Kerala Ayurvedic massage is extremely beneficial in curing major ailments such as arthritis, paralysis, and spondylosis. It further helps in rejuvenating the body, inducing sleep, preventing anxiety and depression, boosting immunity, increasing lifespan, and overall well-being. An authentic Kerala ayurvedic massage also improves skin complexion, softens skin texture, and prevents aging. 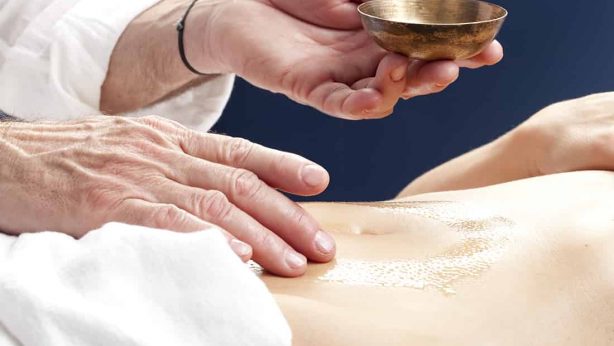 Ayurveda is an intricate and detailed science which provides great...

Thalapothichil is a highly effective ayurvedic treatment. This has numerous...